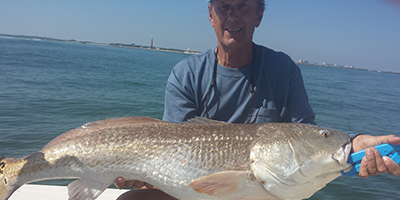 Captain Barry of Fish With Captain Barry has over 40 years of fishing experience. He has fished in most states in the U.S., as well as every province in Canada. He has also fished in many countries in Europe!

He first began work as a fishing guide in the 1970’s in Cape Britain Island, which is situated in Nova Scotia, Canada. During that time he focused on fly fishing for salmon and trout. Later, in 1986, he began operating boat charters in Michigan. There, he fished for salmon, steelhead, lake trout, and browns. It wasn’t until 1990 that he finally settled down in Daytona Beach, FL and became a charter captain and fishing guide.

Captain Barry is a full-time fishing guide, and is an expert in locating fish on the shallow salt flats of East Central Florida. He also offers fresh water fishing in some of the greatest areas in the country for big, large mouth bass and giant crappie.

A fishing license is provided for each fisherman, and light tackle fly fishing or spinning is available for all species. Captain Barry is a U.S. Coast Guard licensed Captain. He is also a member of the “Big Trouble Fishing Team.”

When you need the best, most experienced fishing guide in Daytona Beach, FL, look to Fish With Captain Barry, your ““INSHORE" DAYTONA BEACH FISHING GUIDE!” They will provide the best experience—you can count on it!